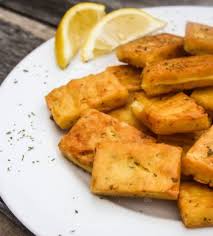 Panelle are round or rectangular fritters of chickpeas, typical of Sicilian cuisine and in particular of Palermo. They are usually served in the midst of the Mafalde, the typical Sicilian sandwiches and very fluffy with sesame seeds on the surface, and they represent the street food par excellence of the Sicilian capital. Consume as a nutritious snack and sold sie in fixed fast, and in those street vendors scattered throughout the city, the fritters are made with a few simple ingredients: chickpea flour, water and parsley. Their ancient origins are probably Arab. In fact, the chickpea leguminous plant is native to East and, growing wild in the whole Mediterranean basin, occupies a prominent place in the local cuisine. It was the Arabs who grinded the seeds of this legume to make a flour that was then mixed with water. This dough, pulled into sheets and then fried, gave life to the first panella. This preparation can be eaten in bread or simply by itself as a hot appetizer.
INGREDIENTS FOR 4 PEOPLE
Chickpea flour 500 g Water 1,5 l Salt 1/2 tablespoon Parsley Just enough PepeThat's enough Peanut seed oil As required
PREPARATION In a large bowl gradually dilute the chickpea flour with water, salt and pepper with a whisk so that there are no lumps.